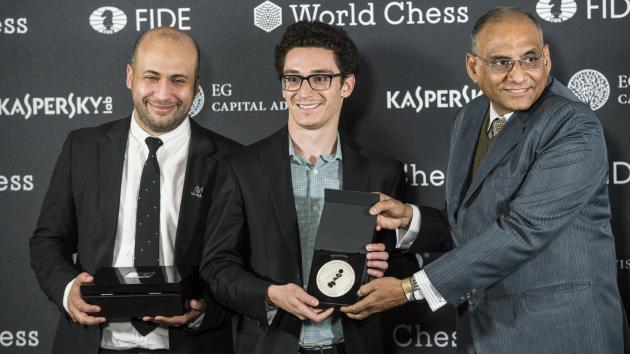 With a total of nine points, one point clear of the second place finish, Fabiano Caruana won the 2018 FIDE Candidates’ Tournament in Berlin convincingly, and earned the right to challenge Magnus Carlsen for the world title in November. Caruana defeated Alexander Grischuk in the final round with the black pieces to secure his victory.

“I’m absolutely thrilled,” said Caruana, in his first statement at the winner’s press conference.  “Coming into today I wasn’t sure what would happen, and things couldn’t have gone better. A few days ago I thought the tournament was already out of my hands when I lost the game, and somehow things just came together perfectly at the end, so I really couldn’t be happier.”

The 25-year-old grandmaster, who was born in Miami, grew up in Brooklyn and who played for Italy between 2005 and 2015, won the tournament by a full point. The next step for him is the world championship.

Following Caruana’s victory, the world champion, Magnus Carlsen twitted “Been great fun following the candidates as a chess fan. Congrats to Caruana on a fully deserved victory, and good luck in November!”